In August of this year, the Martinique group Fal Frett, along with their producer Don Miguel, decided to create a video of the song "Mi Fugue", a beautiful yet mournful ballad featured on the 2013 release "Histoire d'un Vie"


The producer, Don Miguel of Dons Music, engaged Patrice Aboulicam of Radix to direct the video. Patrice chose to film the band on two full day sessions in two locations. The first location was a rehearsal space in Fort-de-France Martinique, and the second was the stunningly beautiful grounds of the JM Rum refinery in Macouba. 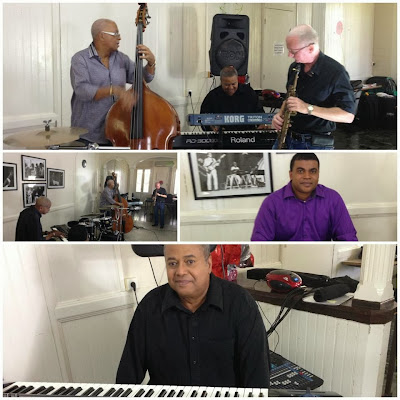 The first day of filming was fairly arduous to say the least. I arrived in Martinique early in the morning and was driven straight to the first location, an old, colonial building in the suburbs of Fort-de France which was obviously used as a music school and rehearsal space.

Fal Frett's instruments were already set up and we got straight down to work. The audio was played from a cd player and under the hot lights we began miming or playing along to the track as Patrice and his assistant filmed us. We were all fairly enthusiastic and bushy-tailed as we performed the first few times through the song. As the day wore on and the number of our run-throughs or 'takes' increased, we realized what hard work it can be filming a music video. By 5pm at the end of the shoot we were jokingly in agreement that we would never play the song again - ever! That same night we played a gig at La Croisiere, a local Martinique jazz club, and sure enough Mi Fugue didn't show up on the set list! 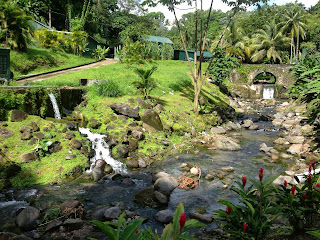 The next day's filming location was the JM Rhum distillery in Manicou, the most northern area of Martinique. The 90 minute drive to Manicou was interesting as I saw the rugged east coast of Martinique with it's isolated fishing villages and undulating countryside. Every turn in the coast road presented another spectacular view of an aggressive sea patiently trying to wear away the formations of volcanic rocks.

Nestled under a volcano and framed by a stream, well kept lawns and gardens, the distilliery was the ideal place for a video shoot. Even though we started in the morning, the air was steaming from the heat and we glanced anxiously skyward watching the occassional rain clouds making low passes over the hills around us. Patrice made some quick decisions about our wardrobe and the locations for each individual musician then he got to work filming us in turn. 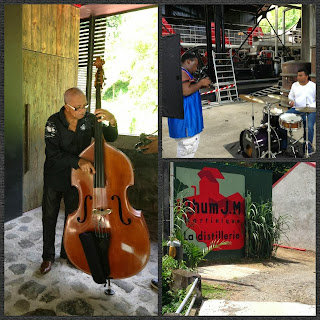 My location was a beautifully manicured lawn next to a large stream filled pond. I followed my directions, walking and playing along to a battery operated cd player taking great care to not step into a puddle, fall into the pond or walk too far and fall off the edge of the lawn. 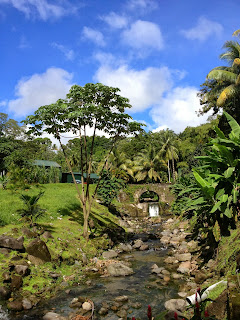 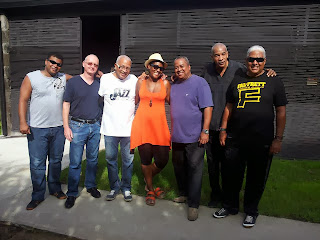 We were so hot our clothes clung to us like street beggars and in two minutes our faces were covered in perspiration. Fortunately during both days of the shoot we had a charming makeup artist Stéphanie Montlouis-Calixte who kept us looking good in the heat of the day without resorting to plastic surgery. It turned out that Stephanie was also skilled in the sandwich making department creating tasty baguettes for us at the end of the day. 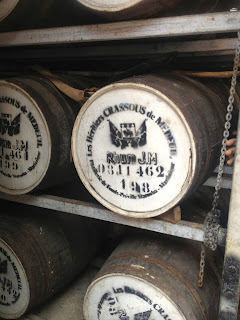 After our filming was complete the kind staff at JM Rhum distillery unlocked the massive doors to their huge warehouse that contained hundreds upon hundreds of rum barrels stacked to the ceiling. 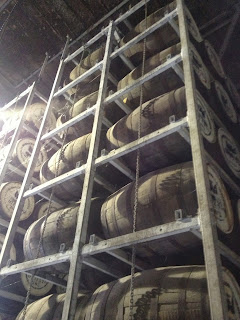 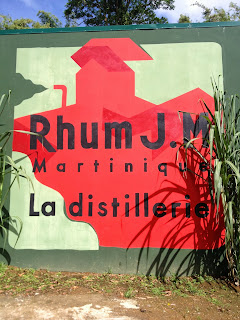 As we eagerly stepped inside, the smell alone was enough to give us a pleasant high - the perfect ending to a very special video shoot!

Posted by Andre Woodvine at 15:19 No comments:

Fal Frett in the 2013 St. Lucia Jazz and Arts Festival

My trip with Fal Frett to the St. Lucia Jazz and Arts festival earlier this year has been nicely documented by a video reporter who traveled with us.


The You Tube clip is mostly in French however if you watch @ 18:58 you will see a surprise appearance by my friend and fellow Bajan musician Andre Forde who happened to be in the audience ready to offer a very articulate opinion on the show - go Andre!

Towards the end you can also hear my mangled Franglais as I wearily eye my dinner, knowing that the sooner I say something for the camera the sooner I can start to eat!

Posted by Andre Woodvine at 14:06 No comments: