Around our house, every day is International Jazz Day! It's wonderful that UNESCO (United Nations Educational, Scientific and Cultural Organization) has recognized April 30th as a day to celebrate "The virtues of jazz as an educational tool, and a force for peace, unity, dialogue and enhanced cooperation among people".
To help celebrate this event, I've released some raw unedited footage from my recent concert "One night only with Andre Woodvine & the original unit".
Here it is!


This original composition is called "One of our beats is missing" (Available here). In the coming weeks I hope to release more concert video, including performances of new compositions. The video was filmed with two cameras and is being professionally edited in barbados by Gatehouse Media.
Our performance took place on January 26th 2013 at the Divi Southwinds Beach Resort under the kind patronage of the Barbados Jazz Society. Accompanying me in this adventure were The Original unit, an exciting trio of Barbadian jazz musicians - David Carnegie on drums, Stefan Walcott on keyboards and Neil Newton on Bass. 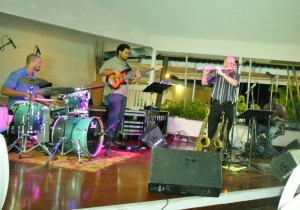 Our concert was great fun for both the musicians and the audience. Click here for a comment from the BJS and here for a review by Natanga Smith of the Nation newspaper. Hopefully the Original unit and I can perform together again soon!

Posted by Andre Woodvine at 08:40 No comments:

For as long as I can remember, my Mum had the habit of using the cost of a supermarket chicken as a sort of unofficial currency. If, for example, we experienced a disappointing restaurant meal, she would invariably exclaim (In a tone of indignation), "Well, I could have bought four chickens for that!"

Last year when I received a prize of four frozen chickens for winning the Shuttlers Badminton club men's doubles tournament (C division). No one was more impressed than my mum.

My earliest experience with chickens was however, very embarrassing. The fact that I am about to share with you such a humiliating anecdote is surely an indication of just how desperate I am to make this blog both entertaining and informative.

I lost a game of tic-tac-toe to a chicken.

You may be wondering, how could this be possible? Allow me to explain.

In the early 1970's my family and I were living in Northern California, USA. We hadn't yet emigrated to Barbados. I would have been a sensitive and somewhat geeky twelve or thirteen year old. All around us in the Bay Area were lots of interesting places to see that would be only a few hours drive from our home. 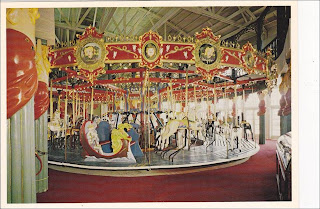 One weekend we took a trip to Cannery Row in Monterey, where we stumbled upon an amusement arcade in a refurbished warehouse called the Edgewater Packing Co.. I can recall seeing a beautiful wooden carousel surrounded by a variety of arcade games, (space invaders hadn't been invented yet). 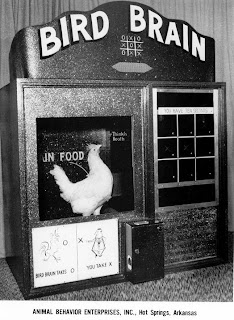 One of the games I approached consisted of a large glass cabinet, and to my surprise, inside the case, awaiting its next victim, was a live chicken. On the front of the cabinet, was an illuminated tic-tac-toe board, a coin slot and instructions. My parents inserted a coin. After sizing me up, the chicken confidently pecked at its side of the game board and an "O" was illuminated on my side. I was stunned. Was this real? Who was looking after this chicken? Who trained it? With all of these questions buzzing around in my head, I pressed a button on the board corresponding to an "X". Without hesitation, the chicken countered by pecking it's "O" choice on the board. What! I thought. How could this be? A chicken, playing tic-tac-toe!? My attention to the game lapsed. Distracted, I placed my next "X" in an available square.
With the self-assurance of a true champion, the chicken made its final devastating move, achieving three x's in a row. In a daze, I heard the feed dispenser inside the game open and disgorge a generous helping of poultry feed to reward the victorious chicken, closely followed by the loud howls of laughter as my parents enjoyed the look on my face. I had lost... to a chicken.

Here is a YouTube video with an example of a "Bird Brain" in action!


This episode in my life became a part of our family folklore, every once in a while during family visits, someone would reminisce about the day the chicken beat Andre at tic-tac-toe.
Recently I began to wonder if my memories are accurate, after all, it did happen quite a while ago. Thanks to the power of the internet, I'm happy to share with you this article by Sue Fishkoff from the Monterey County Weekly .

Further investigations on the web have also revealed the chicken's secret. Here is the manual for the game known as Bird Brain. It turns out that the chicken was not pecking at individual "O"s on the board after all! Using a simple electronic circuit, the game was rigged to play by itself with stimulus from the trained chicken which pecked the board on her side of the cage whenever a light would illuminate. Here is a quote from the manual;

"Because the chicken plays first, and because her selections are made by electronic circuitry, the customer can do no more than tie the game"


So there you have it! I was the victim of a cleverly designed arcade game and I am smarter than a chicken. Tic-tac-toe anyone?