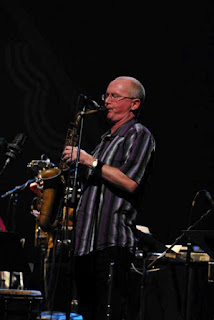 Jazz saxophonist and composer André Woodvine is a graduate of Berklee College of Music (1986), where he majored in performance. His interest in woodwinds extends to the alto, tenor and soprano Saxes and the flute. For over Twenty Five years, André's music has taken him to stages across the Caribbean, North America and Europe where audiences have enjoyed his passionate tone, exciting improvisations and unique compositions.

André has produced four CDs of original Caribbean Jazz, including his most recent release entitled “Fix it on Monday”. His compositions are regularly played on radio stations throughout the Caribbean and are covered by Barbadian jazz ensembles. André composes music in a wide variety of styles including television sports themes, jingles and show tunes. Andre's 1992 composition “Hold you in a song” earned first place in both the Barbados and Caribbean Song festivals.

Over the years André has also been featured on recordings by local and regional jazz artists including El Verno Del Congo, Adrian Clarke, Fal Frett, The West Indies Jazz Band and most recently Ebe Gilkes.

Woodvine’s musical interests have extended to the development of Caribbean Jazz through education. In 1998 André assisted in the formation of the first associate degree of music program at the Barbados Community College, where he now teaches part-time. Andre has also been involved in the development of the Copyright Society of Composers Authors and Publishers (COSCAP) where he spent Five years as a member of the board of directors including one and a half years as the Chairman of the board.

André enjoys a close association with the music scene of the French Caribbean and has been a member of the group Fal Fret for the past Fifteen years. Fal Fret has featured Andre's performances on their CDs 'Live at the Atrium' and 'Blue Outremer'.

In 2009, Woodvine mixed the debut cd of Barbadian jazz pianist Ebe Gilkes and, in January 2010, André made a special performance with the Martinique Jazz group Fal frett at the legendary L'Olympia concert hall in Paris. In 2011 André performed in two sold out shows at the Martinique jazz festival and in 2012 André was selected to represent Barbados at the MIDEM international music tradeshow.

André recently returned to school online at Berklee College of Music, where he successfully completed courses in film scoring, orchestration and composition for film and television. His film music can be heard in several You Tube productions including “The Kirk and Roxann show” a short comedy series by Trinidadian director Kirk Budhooram.

André resides in the Island of Barbados with his wife Louise and two sons.